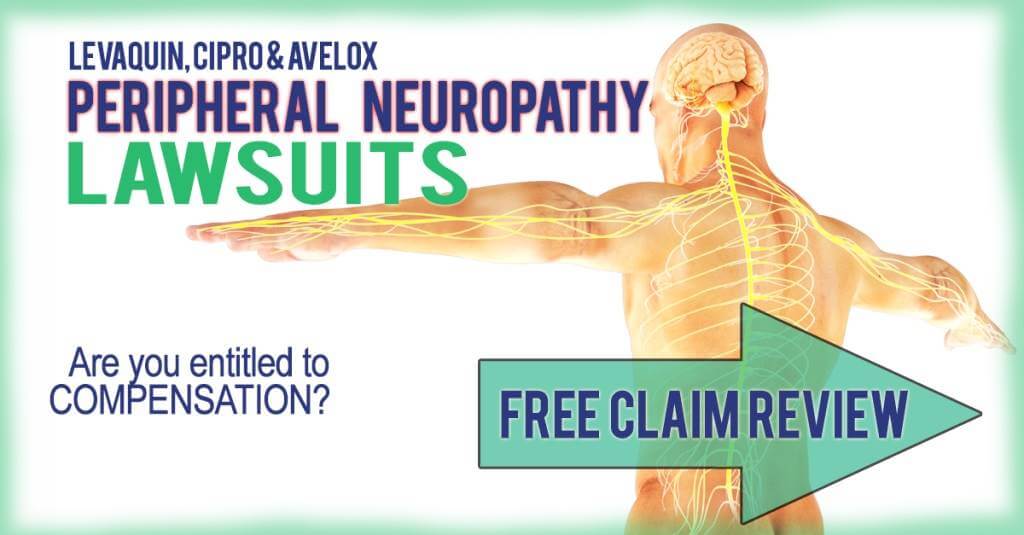 If you have suffered an aortic aneurysm or are experiencing the symptoms of peripheral neuropathy after using the antibiotic Levaquin, you may be entitled to significant compensation.

Johnson & Johnson’s Janssen Pharmaceuticals unit is facing a growing number of Levaquin lawsuits filed on behalf of patients throughout the United States who claim to have suffered an aortic aneurysm, peripheral neuropathy (nerve damage) and other potentially life-altering injuries while taking the controversial fluoroquinolone antibiotic medication. If you believe you or a loved one has suffered aortic aneurysm or aortic dissection injuries from Levaquin, or another potentially defective medication, our consumer advocates at the Consumer Justice Foundation can help. We are dedicated to protecting the rights of consumers harmed by dangerous pharmaceutical drugs, and we can help put you in touch with a product liability lawyer who has experience handling Levaquin aortic aneurysm claims.

Many people experiencing a bacterial infection, skin infection or another type of infection assume that taking an antibiotic medication is the only way to effectively fight the infection and relieve the associated symptoms. However, there are actually a number of natural treatment options that may be beneficial in helping with certain types of bacterial infections and skin infections, without the use of potentially dangerous antibiotic drugs, including the following:

A prescription antibiotic medication used to treat bacterial infections, skin infections and other conditions, that may be linked to aortic aneurysm and nerve damage side effects.

Levaquin (levofloxacin) is an antibiotic medication commonly prescribed to treat common conditions, like pneumonia, bacterial infections and skin infections, as well as far more rare conditions, like the bubonic plague. Levaquin, which belongs to the fluoroquinolone class of antibiotic drugs, was approved by the U.S. Food and Drug Administration (FDA) in 1996, and is manufactured by Johnson & Johnson’s Janssen Pharmaceuticals subsidiary. The antibiotic medication kills bacteria by interfering with DNA inside cells, and a growing number of studies published in recent years have suggested that the way Levaquin and other fluoroquinolone antibiotics are designed to function may be what makes them so dangerous.

Possible Side Effects Leading to a Levaquin Lawsuit

Recent research has established a potential connection between Levaquin treatment and aortic aneurysm, an enlargement of the aorta, which is the main blood vessel that runs from the heart through the center of the chest and abdomen, and supplies blood to the body. Damage to the aorta can cause a number of potentially life-threatening problems, including heart attacks, strokes, organ failure and possibly even death. The two types of aorta damage allegedly associated with the use of fluoroquinolone antibiotics are aortic dissection (tears) and aortic aneurysm (rupture). Symptoms of an aortic aneurysm or dissection may include a pulsating feeling near the navel, paralysis of an arm or leg, chest pain, or pain in the back, abdomen or side.

In addition to aortic aneurysm and aortic dissection, side effects of Levaquin may include potentially irreversible nerve damage, occurring when the nerves that connect the brain to the rest of the body become damaged, resulting in a condition known as paresthesia in the arms and legs. There are more than 100 different types of peripheral neuropathy that can affect Levaquin patients, depending on which nerves are damaged. In most cases, Levaquin users suffering from nerve damage exhibit problems like muscle weakness, general numbness, and problems with coordination, which can result in difficulty walking, balancing or simple tasks like fastening buttons. More serious types of nerve damage can result in severe, chronic pain that can be extremely difficult to treat. Some of the most common symptoms of peripheral neuropathy include:

Levaquin and Aortic Aneurysm or Dissection

In 2015, two studies published in JAMA Internal Medicine and the British Medical Journal highlighted the potential for fluoroquinolone antibiotics like Levaquin to cause aortic dissections and aneurysms, which scientists suspect may be caused by the powerful medications’ ability to break down collagen in the body, which makes up the lining of the aorta. According to the JAMA study, Levaquin and other fluoroqinolones were associated with a two-times increased risk of aortic aneurysm and dissection within 60 days of using the drugs. In the BMJ study, researchers followed roughly 1.7 million patients and found that one-third of them received a prescription for a fluoroquinolone antibiotic. The researchers also found a nearly three-times increased risk of aortic aneurysm associated with the medications. While an aortic dissection involves a tear in the aorta, an aneurysm occurs when part of the aortic wall enlarges or bulges, weakening the aorta and making it more likely to rupture.

Link Between Levaquin and Peripheral Neuropathy

The first notice about the potential connection between Levaquin and peripheral neuropathy was raised in a September 2004 warning issued by the FDA, in which the agency indicated that patients taking Levaquin may suffer symptoms of nerve damage, such as “pain, burning, tingling, numbness, and/or weakness or other alterations of sensation including light touch, pain, temperature, position sense, and vibratory sensation.” In August 2013, the FDA issued updated warnings about the risk of severe nerve damage from Levaquin, indicating that some patients may experience peripheral neuropathy within days of starting treatment, and that the condition may lead to chronic pain and permanent disability. This FDA warning was followed by a study published in the journal Neurology in August 2014, in which researchers found that patients taking drugs from the fluoroquinolone (FQ) class of antibiotics, like Levaquin, had double the risk of suffering peripheral neuropathy.

Lawsuits Against Levaquin for Aortic Aneurysm, Peripheral Neuropathy and Other Side Effects

September 10, 2014 – A Levaquin lawsuit is filed in California federal court on behalf of a woman who suffered peripheral neuropathy side effects while taking Levaquin.

June 30, 2015 – A product liability lawsuit is filed by a man who was diagnosed with peripheral neuropathy side effects after taking Levaquin.

July 30, 2015 – A Texas woman brings a Levaquin lawsuit against Janssen Pharmaceuticals after suffering debilitating nerve damage injuries, alleging that the drug maker failed to provide consumers with adequate warnings about the risk of Levaquin complications.

August 13, 2015 – Law firms representing dozens of former Levaquin users who believe they were harmed by side effects of the antibiotic drug file a motion requesting that the product liability lawsuits be centralized in one federal court.

August 17, 2015 – Dozens of lawsuits involving nerve damage from Levaquin are centralized for coordinated pretrial proceedings in Minnesota, as part of a multidistrict litigation.

August 15, 2013 – The FDA publishes new warnings about the potential for Levaquin to cause possibly irreversible peripheral neuropathy in users within 72 hours of starting treatment.

November 19, 2014 – The FDA receives two petitions from consumers who raise concerns about the lack of Levaquin label warnings regarding the risk of psychiatric side effects and mitochondrial toxicity.

August 7, 2015 – Experts urge the FDA to add a risk of mitochondrial toxicity to the warning label for Levaquin and other medications belonging to the same class of antibiotics.

December 2001 – A study published in The Annals of Pharmacotherapy finds a possible link between the use of fluoroquinolone antibiotics like Levaquin and peripheral neuropathy side effects.

August 25, 2014 – The medical journal Neurology publishes research finding a two-fold increased risk of peripheral neuropathy side effects associated with the use of fluoroquinolone antibiotics like Levaquin.

February 9, 2015 – A case report involving a Massachusetts woman indicates that she used a generic version of the antibiotic Levaquin for just nine days, and subsequently suffered severe nerve damage.

March 27, 2015 – A North Carolina woman believes that side effects of Levaquin caused her to suffer severe nerve damage and other injuries, and is pushing to get the medication pulled from the market.

November 2015 – JAMA Internal Medicine publishes a study linking fluoroquinolones to a two-times increased risk of dissection and aneurysm within 60 days of using the medications.

Every year, millions of people are administered Levaquin, either in oral or intravenous form, and many of these people are unaware of the potential for the antibiotic drug to cause aortic aneurysm, peripheral neuropathy and other major side effects in users. Experts, however, have been aware of the risks of fluoroquinolones since at least 2001, when one study of 45 cases of peripheral neuropathy found an association between fluoroquinolone antibiotics and “severe, long-term adverse effects involving the peripheral nervous system as well as other organ systems.” Unfortunately, Janssen Pharmaceuticals has failed to provide consumers and the medical community with adequate warnings about the dangers of fluoroquinolones, and product liability lawsuits brought against Janssen in recent years allege the following:

What should you do? If you have suffered aortic aneurysm or peripheral neuropathy side effects, you should contact an attorney as soon as you can, to discuss filing a Levaquin lawsuit against Janssen.

Patients expect antibiotic medications like Levaquin to treat their infection or other medical problem without putting them at risk for unnecessary injuries. However, studies have shown that patients taking Levaquin or another drug in the fluoroquinolone class of antibiotics may be at risk for devastating and potentially irreversible side effects like peripheral neuropathy, aortic aneurysm or aortic dissection. As more information comes to light about the risk of health problems from Levaquin, a growing number of product liability lawsuits are expected to be brought against Janssen Pharmaceuticals, on behalf of injured patients nationwide. If you took Levaquin in the past, and you have since suffered from peripheral neuropathy, aortic aneurysm or another serious side effect, contact a reputable Levaquin attorney today for legal help.